Get Involved » Attend an Event » Hall of Fame Inductees

George Behrakis – Current member of the Board of Trustees, President of the Board of Directors 1983-84. A member of the team that invented Tylenol in the fifties, George went on to create Muro Pharmaceuticals. He is a noted philanthropist and community leader. He contributed to the construction of the current Club on Middlesex Street, to the endowment campaign, donated the first technology lab at the Club and led a campaign to retire the mortgage and celebrate the Club’s 100th Anniversary.

Telemachus Demoulas—The longtime president of the Demoulas grocery chain which grew from 15 stores to 57 under his leadership. Made the lead gift and was a major fundraiser in the capital campaign for the building on Middlesex Street as well as a campaign to start an endowment at the Club which has since more than doubled in size. He was well known for his philanthropy., and is credited for revitalizing the Acre neighborhood in Lowell.

William “Billy” King – President of the Board 1984-86, New England Sales Manager for the world’s largest chemical company, BASF, later National Accounts Manager for Luzenac. He authored the book “The Acre, 1941- 1951” . Mr. King helped lead the fundraising drive for the expansion of the Club on Middlesex Street.

Frederic C. Church, Sr. – President of the Board 1923-1937 and a member of the board for 30 years. He successfully guided the Club through 15 years of exceptionally favorable progress—not only through the years of prosperity, but through the years of extreme adversity as well. During the depression, the Lowell insurance icon kept the Club afloat and its doors open to the “street boys” who needed home away from home.

Ray Riddick – President of the Board 1955-57, and a legendary Lowell High athletic coach. The school’s field house is named after him. He played college football at Fordham University with Vince Lombardi and the Seven Blocks of Granite and professionally for the Green Bay Packers for one season.

John A. Notini – A former board member, the pool was named after him. He was the General Manager and Treasurer of Notini & Sons.

Major Walter Jeyes, Sr. – A Spanish American War Veteran, Major Jeyes was Superintendent of the Club from 1916-1930 and worked for Superintendent Stewart for 3 years prior to that. He led renovations of the Dutton Street Club including moving the showers to the basement and expanding them so 50 boys could use them at once (at the time, it was the only place many kids could bathe) and expanding the Games Rooms. He also created a farming program on Varnum Avenue. His son, Walter Jeyes Jr., followed him as Superintendent from 1930-1958.

Raymond Hamel – Ray is a Club alumnus who is now a leader in the HVAC field in New England and beyond, and credits his success to the Boys & Girls Club. He has stayed involve with the Club for over 25 years as a former Director and current Trustee.

Arthur Koumantzelis – Arthur is a Club alumnus with great success in the world of finance and accounting. Arthur has served the Club for more than 25 years as a Director, then Trustee. He has also been involved in many other philanthropic causes in the region.

William Vrettas – William was the Executive Director for the Club for over 20 years, overseeing the development and construction of the current facility on Middlesex Street, as well as the endowment campaign and opening of Camp
Lamson.

Brian Chapman – Brian Chapman (Chappy), Club alumnus and Environmental Engineer, was one of the first kids to attend the George A. Demoulas Clubhouse in the 1970s, and has been actively involved with the Club ever since. In 2007, Brian began his tenure on the Board of Directors, serving as the Board Chair from 2015 to 2017. Additionally, Brian now serves as a Trustee. Brian is a successful business owner, and founder of Mill City Environmental, a licensed, minority-owned, full service environmental firm. He has also been the recipient of several community accolades, making Brian a shining example of the great things that Club kids can accomplish.

Keith Rudy, Sr. – Keith “Kiki” Rudy, Sr. , Club alumnus, was named the 1974 Boy of the Year (our current Youth of the Year program), and soon after became the New England Welterweight Golden Gloves Champion. Keith also served as a Corporator for a number of years, and formed the Acre Youth Organization in the 1980s to help ensure that kids have access to sports programs. Keith credits the Boys & Girls Club of Greater Lowell (formerly the Lowell Boys Club) with helping to turn his life around in the 1970s.

William “Billy G.” Gilmore – William “Billy G.” Gilmore began has Club career at the Boys & Girls Club of Greater Nashua before becoming the Athletics Director at the Boys & Girls Club of Greater Lowell in 2006. One of Billy G’s most notable contributions was being the founder of Peace League, an annual teen basketball initiative with the City of Lowell. Billy G’s legacy continues to live on through the individuals whose lives impacted by his time as the Athletics Director and by his mentorship.

There are many ways to support the community, whether as a volunteer or as a donor. Click below to learn more.

Stay in the loop with
Boys and Girls Club

Your support opens the door to opportunity, friendship, healthy meals, and more.

Open the Door to Great Futures

Please consider a gift to our Year-End Campaign to help ensure all youth in Lowell have equal access to a great future. 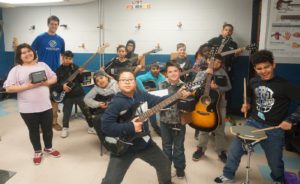